April 06, 2011
.
Excerpt from the Presidential Address delivered by the Quaid-i-Azam 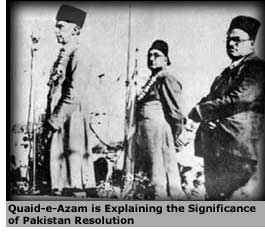 "It is extremely difficult to appreciate why our Hindu friends fail to understand the real nature of Islam and Hinduism. They are not religious in the strict sense of the word, but are, in fact, different and distinct social orders; and it is only a dream that the Hindus and Muslims can ever evolve a common nationality. This misconception of one Indian Nation has troubles and will lead India to destruction if we fail to revise our notions in time. The Hindus and Muslims belong to two different religious philosophies, social customs, literatures. They neither intermarry nor interdine together and, indeed, they belong to two different civilizations which are based mainly on conflicting ideas and conceptions. Their aspect on life are different. It is quite clear that Hindus and Mussalmans derive their inspiration from different sources of history. They have different epics, different heroes, and different episodes. Very often the hero of one is a foe of the other and, likewise, their victories and defeats overlap. To yoke together two such nations under a single state, one as a numerical minority and the other as a majority, must lead to growing discontent and final destruction of any fabric that may be so built for the government of such a state.” (Presidential Address by the Quaid-i-Azam, Lahore March 22-23, 1940)