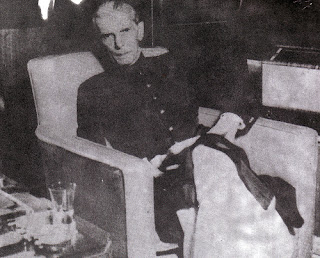 The view that Muslims of India are solidly behind the struggle which the Arabs are carrying on in Palestine for their freedom was expressed by Quaid-i-Azam Muhammad Ali Jinnah, President of the All India Muslim League. Commenting on the declaration of policy by His Majesty’s Government on the Palestine problem, the Quaid said:

"I feel that Arab leaders of Palestine and the neighboring States will be far more competent to deal with the matter than any Indian can from this distance, as they not only are fully competent but also understand the situation on the spot better. I would not, therefore, at this stage venture to make any suggestion of a concrete nature, but would like to make it clear that Muslims of India are solidly behind the struggle which the Arabs are carrying on for their freedom. Their feelings and sentiments have been repeatedly presented to the British Government".

"Only in September last, in a long interview with His Excellency the Viceroy, I conveyed to him and the Government of India the intensity of the feeling in India on this matter. It has been the greatest difficulty with us during the last few months to restrain and to hold the Muslims of India from openly revolting. The way in which the British Government have hitherto dealt with the Arabs is the greatest blot on their national honour. I trust that the British nation and His Majesty’s Government will make the fullest amends for their past mistakes before it is too late and not take shelter under the plea of that most unjust Balfour Declaration, which never ought to have been made, and further the plea of appeasing international Jewry.

"In my opinion Great Britain should never have broken her plighted word with the Arabs and should have given them their promised independence long ago. Further it was a most cruel thing that they should have tried to dump Jews on Palestine at the bidding of foreign nations influenced by the Jews and thus created a most pitiable situation for the Jews themselves who went to the land of the Arabs and settled there under the plea of their so-called national home.

"I can only strike a note of caution to the Arab leaders if they decide to participate in the proposed Round Table Conference, that they send representatives of their own choice, commanding the confidence and the respect of the Arabs and see that the conference does not turn out to be the story of the ‘monkey doing justice between the two quarrelling cats."