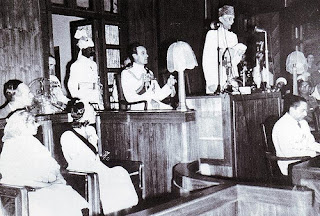 The Quaid-i-Azam Muhammad Ali Jinnah during his first address to the Constituent Assembly of Pakistan on 11th August, 1947 said:

“We are all citizens and equal citizens of one state….Now I think we should keep that in front of us as our ideal, and you will find that in course of time Hindus would cease to be Hindus and Muslims would cease to be Muslims, not in the religious sense, because that is the personal faith of each individual, but in the political sense as citizens of the State.”1

Those who do not have full grasp of the Two-Nation Theory are often misled by the phrase used by the Quaid when he said, “Hindus would cease to be Hindus and Muslims would cease to be Muslims.” They wrongly infer from these words that the Quaid’s vision of Pakistan was that of a secular state in which religion would have no role to play. In this way they mistakenly by wish to hoodwink the people that with the creation of Pakistan the Quaid had given up his affiliation with the Ideology of Islam which he so vehemently asserted before the creation of Pakistan. This mistaken view has already witnessed dangerous interpretations. Therefore, it is not surprising when people of much high caliber as Mr. Justice Mohammad Munir, the former Chief Justice of Pakistan, in his book from Jinnah to Zia while referring to the said speech of the Quaid has observed:

“The pattern of Government which the Quaid-i-Azam had in mind was a secular democratic government.”2

The pre-political phase of the Two-Nation Theory should not be confused with its post-political era. Evidentially, before the creation of an Islamic State, the Muslims and the non-Muslims are two different and distinct nations. The Muslims, in every respect, are a nation, irrespective and independent of geographical boundaries and racial or linguistic bonds. Their religion governs them in every walk of life. In their socio-economic solidarity they have not to be dependent on the state legislation. State legislation is just transcendence of the comprehensive and complete code of life laid down by the Holy Quran and the Holy Sunnah of the Holy Prophet Muhammad (Sall Allah ho alaihe wa sallam).

Islam provides intellectual foundation for the institutional organization of mankind; whereas territorial nationalism based on geographic, linguistic and racial affinities lead to spiritual paralysis and material superiorities of colour, language, territory, tribe and heritage. Territorial nationalism makes impossible the universal brotherhood of mankind. The motto of Muslim Nationhood in the expression of the Unity of God (Taied-e-Ilahi) in thought and action in accordance with the Will of God. Despite everything else the word country (watan) as a term of Geography is not contrary to Islam. Love of Motherland is a natural sentiment. But when the word country is used as a concept of Political Science, it comes into conflict with Islam, for Islam is itself a comprehensive principle of institutional organization.

The Quaid-i-Azam Muhammad Ali Jinnah is therefore, rightly following in the footsteps of the Holy Prophet Muhammad (Sall Allah ho alaihe wa sallam) when before the Independence he asserted with his thundering voice that the Muslims of the sub-continent are a different nation altogether. And when, with the grace of Allah, he succeeded in establishing a sovereign Muslim State, he declared in his address to the Constituent Assembly that the non-Muslims would be as good and privileged citizens of the State as the Muslim citizens. The words “in the political sense as citizens of the State” occurring in the Quaid’s speech are significant and self-explanatory.

The Holy Prophet Muhammad (Sall Allah ho alaihe wa sallam) treated the Muslims of Arabia as a different nation from the non-Muslim Arabs. When he established a sovereign Muslim State of Madina, he enforced ‘Mithaq al-Madina’ as the first Constitution of the first Islamic State. In this constitutional document the Jews of Madina were given the same status as citizens which was given by the Quaid-i-Azam to the Hindus and other minorities of Pakistan. The Article No.1 of the Mithaq al-Madina runs as,

“They (the Muslims and the Jews of Madina) constitute a single community distinct from the other people.”

“This suggests that the Ummah (Ummat al-Muslima) is no longer a purely religious community.”3

This Article clearly stipulates the supremacy of Allah and the Holy Prophet which means that the ‘Shariah’ shall be the supreme law of the State of Madina. When Article No.1 and Article No. 42 are read together it necessarily implies that the Holy Quran and the Holy Sunnah shall be the supreme law of the land. The Muslims as well as the non-Muslims shall be the equal citizens under the umbrella of the ‘Shariah’. Every citizen whether she/he is a Muslim or a Jew shall follow his/her respective obligation as enjoined by the ‘Shariah’. Politically they constitute one community. Their religious differences recede to the level of personal affairs. This is exactly what the Quaid-i-Azam Mohammad Ali Jinnah wanted to convey to the Nation in his historical address of 11th August, 1947 to the Constituent Assembly of Pakistan.

We can, therefore, safely conclude that this misconception thus created seems to be an act of extreme injustice, aimed at distorting the real version of the Quaid’s speech and impute secularism and separation of politics from religion to Quaid-i-Azam Mohammad Ali Jinnah, when he actually did not mean it. It is intellectual dishonesty and a worst kind of distortion in utter disregard of the context of the speech and the context of all other statements and speeches of Quaid-i-Azam Mohammad Ali Jinnah. Even, in this speech he has advocated the integration of religion and politics in the light of the Sunnah of the Holy Prophet Mohammad (Sall Allah ho alaihe wa sallam).