Pakistan : As Envisaged by Allama Iqbal and Quaid-e-Azam M.A. Jinnah

December 12, 2010
A strange phenomenon indeed that even after a lapse of 62 years of Pakistan having come into existence, a controversy is still raging as to which type of system was intended to be implemented here Secular, Theocratic or any other. A group of so- called intellectuals opine that the architect of Pakistan, Quaid-i- Azam Mohammad Ali Jinnah, wanted it to emerge as a Secular State. They base their arguments exclusively on Quaid’s address to the Constituent Assembly on August 11,1947 .On the other hand, there is the religious orthodoxy, that had initially opposed the very creation of Pakistan under the pretext that since they had been promised by the Indian National Congress, that the Muslims would be free to discharge their religious obligations freely in India after independence, there was no need to create a separate state for the Indian Muslims. However, no sooner did Pakistan come into existence, these so- called “ Ulema” flocked to the new born state and had the temerity to claim that since Pakistan was created in the name of Islam, they only were the competent authority to determine the Islamic system to be implemented here .Now, who does not know, that their’s is essentially a retrogressive and purely ritualistic brand of “ Islam”, which they intend to impose, here forcibly. 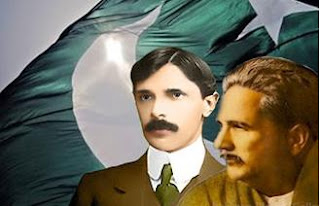 Best way to resolve this riddle is to learn the truth from the proverbial “horse’s mouth” Who can be the better judge to resole the dilemma than the founders of Pakistan, namely, Allama Iqbal, who conceived the idea of a separate state for the Indian Muslims and Quaid-i-Azam M.A. Jinnah , who realized Iqbal’s dream by securing a country for them— the Islamic Republic of Pakistan, . Given here under, are excerpts from the speeches and addresses of these giants, to make the issue crystal clear.

Iqbal, the spiritual father of Pakistan, who conceived the idea of a separate state for the Muslims of the Indian sub-continent, said during his presidential address at the annual session of the All India Muslim League at Allahabad in 1930, that” India was the biggest Islamic country and in it Islam could be sustained as a living cultural entity only if it was centralized in a specific territory.( for that, he demanded ) formation of a consolidated Muslim State in the best interest of India and Islam. For India, it means security and peace resulting from an internal balance of power; for Islam an opportunity to rid itself of the stamp that Arabic Imperialism was forced to give it, to mobilize its laws, its education, its customs, its culture, and to bring them in close contact with its own original spirit and with the spirit of modern times”.

He elucidated the point further in his monumental work known as,” The Reconstruction of Religious Thought in Islam” by saying, “….during the course of history, the moral and social ideals of Islam have been gradually de-Islamized through the influence of local character, and pre-Islamic superstitions of Muslim nations……The only alternative open to us, then, is to tear off from Islam the hard crust which has immobilized an essentially dynamic outlook on life, and to rediscover the original verities of freedom, equality and solidarity with a view to rebuilt our moral, social and political ideals out of their original simplicity and universality.”

Highlighting the paramount importance of “permanence” and “change” factor in Islamic laws he in his unique masterly style asserts,” The ultimate spiritual basis of all life, as conceived by Islam is eternal and reveals itself in variety and change. A society based on such a conception of Reality must reconcile, in its life, the categories of permanence and change .It must possess eternal principles to regulate its collective life, for the eternal gives us a foothold in the World of perpetual change. But eternal principles when they are understood to exclude all possibilities of change….. tend to immobilize what is essentially mobile in nature.The failure of Europe in political and social science illustrates the former principle, the immobility of Islam during the last 500 years illustrates the latter .What then is the principle of movement in the nature of Islam? This is known as “ Ijtihad”

In his concluding remarks ( 6 th lecture), Iqbal advises, “ Let the Muslim of to-day appreciate his position, reconstruct his social life in the light of ultimate principles( of Quran) and evolve out of the hitherto partially revealed purpose of Islam, that spiritual democracy which is the ultimate aim of Islam”. If we go through the speeches / statements made by the Quaid- i– Azam, before the birth of Pakistan and after, quite a clear picture emerges in this regard. Relevent excerpts are being reproduced here to illustrate the moot point:–

“ Pakistan not only means freedom and independence, but also the Muslim Ideology that has to be preserved that has come to us as a precious gift and treasure”.( Chittagong- March,1948). “ In Pakistan lies our deliverance, defence and honour. If we fail, we perish and there will be no signs and symptoms of Muslims or Islam left in the sub-continent” ( Pakistan Day –March, 1945 ).

“ The Constitution of Pakistan has yet to be framed——-I am sure it will be of a democratic type embodying the essential principles of Islam. To- day, they are as applicable in modern times, as these were 1300 years ago———in any case, Pakistan is NOT going to be a Theocratic State——-to be ruled by the priests with a Divine mission “( broadcast to the U.S.A. February,1948). “ Islam is not merely confined to the spiritual tenets and doctrine, rituals and ceremonies. It is a complete code regulating the whole Muslim Society, every department of life collectively and individually.” ( Eid Massage—September, 1945 ).

“In Islam, ultimate obedience belongs to God alone. The only way to follow this guidance is through the Holy Quran. Islam does not preach obedience to a king, parliament, person or institution. The Islamic Govt. means rule of the Quran. And how can you establish the rule of the Quran without an independent state?”
(Address to the students of the Usmania University, Deccan, India — August,1941).

From the foregoing discussion, it is absolutely clear, that the founding fathers envisioned Pakistan to emerge as a Democratic Islamic State and not a Secular or Theocratic one. There is a misperception that, if it is not a Theocratic State, then it necessarily has to be a Secular one and vice- a- versa. It is not so. An Islamic State, in fact, lies some where in between these two extremes .To be brief, Theocracy means absolute control of religious clergy over public and private affairs, where as in Secularism, religion is virtually banished from having any say in public (state) affairs. In Islam, there is no segregation between the private and public life and also, there is no priesthood in it. There is no intermediary between Man and his Allah, Quran being the only link between the two which means, Quranic Laws govern the private as well as public affairs in an Islamic State.