The Father of Pakistan 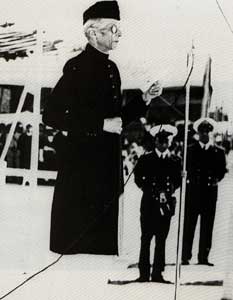 Mohammed Ali Jinnah, Pakistan's founder and Quaid-i-Azam, or great leader, was the exact opposite of Gandhi. Cosmopolitan, a successful and wealthy barrister, a fastidious dresser, alone and aloof, speaking mostly English, Jinnah dismissed his great rival as "that Hindu revivalist." He was appalled by Gandhi's mass agitation campaigns because they were illegal and unconstitutional, appealed to popular emotion and, in Jinnah's eyes, led only to chaos and division. His personality demanded a cool, cerebral response, working through legal and constitutional channels to bring about an end to British rule.

His icy determination galvanized a community into following him toward his goal, Pakistan. It was the same determination, seen this time as obduracy, that so infuriated Gandhi, Nehru and Louis Mountbatten, Viceroy of India, who eventually accepted the division of Britain's greatest imperial possession into two sovereign countries--Pakistan and India. "Failure is a word unknown to me," Jinnah once commented.


That steely resolve took him from self-imposed and prosperous exile in Britain in 1935 at the age of 58 to leadership of a new country 12 years later. One year after the partition of India and the birth of Pakistan, he was dead from cancer at age 71. He reshaped the Muslim League, a moribund organization of establishment figures, into a personal instrument, a highly politicized and disciplined party machine covering all parts of India's Muslim community. Its sweep of Muslim constituencies in the 1946 election, fought on a campaign of partition, ensured the creation of Pakistan when Britain quit the subcontinent.

Jinnah distrusted Nehru, whom he described as a "busybody." Nehru told Mountbatten that success had come to Jinnah late in life, giving him a "permanently negative attitude." His relationship with Gandhi was formal, but their exchanges were often petulant and facetious. "You have mesmerized the Muslims," Gandhi said to him once during the last years of British rule. To which Jinnah retorted, "You have hypnotized the Hindus."

Jinnah was not always a separatist, but throughout his life he was a passionate defender of the rights of Indian Muslims. After the 1937 elections, when the majority Congress party refused to share power with the Muslim League, Jinnah concluded that under its leadership Muslims would become second-class citizens. From then on the road led only to Pakistan. "Think 100 times before you take a decision," Jinnah said at the Muslim League's historic 1940 Lahore Conference, which came down in favor of partition. "But once that decision is taken, stand by it as one man." He obeyed his own diktat and refused to be deflected by political expediency. There was no force to back him. He created Pakistan out of sheer will and against enormous odds.