April 13, 2010
After his return to India Jinnah chose Bombay for his residence since he no longer had any interest in Karachi after the demise of his mother and his wife. His father joined him there and died in Bombay on the 17th of April 1902, soon after Jinnah had started his political career.

In the next two decades after his return from London, Jinnah established himself first as a lawyer and then as a politician. Devoted completely to his work he sailed between England and India and from one stage of his political career to the next. 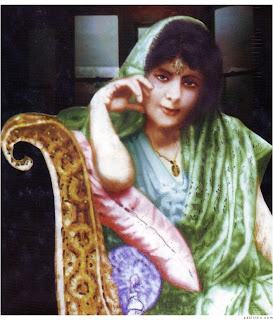 Jinnah vacationed in the north in Darjeeling in 1916, staying at the summer home of his friend Sir Dinshaw Manockjee Petit, the son of one of the richest and most devoutly orthodox Parsi of the nineteenth century. It was in that summer that he met Dinshaw’s only daughter Ratanbai. Born on February 20, 1900, Ratanbai, or Rutti as she used to be called, was a charming child. ‘…Precociously bright, gifted in every art, beautiful in everyway. As she matured, all of her talents, gifts and beauty were magnified in so delightful and unaffected a manner that she seemed a fairy princess’ – Stanley Wolpert, Jinnah of Pakistan.

She was sixteen at that time and Jinnah was about forty. He was enamored by her beauty and charm and she was awe struck by Jay, as she called him. Jinnah spoke to Sir Dinshaw about inter-communal marriages, to which his friend had replied that he was not opposed to them. When Jinnah put forth his offer of a marriage proposal for his daughter Ruttie, Sir Dinshaw was taken aback. He refused bluntly and said there was no chance of his ever agreeing to such a thing. That was the end of their friendship as Sir Dinshaw never gave in. He forbade Ruttie to meet Jinnah while she lived in his house. The couple patiently waited for two years required for Ruttie to come of age. In February 1918 Ruttie turned 18 and was free to marry. On April 18, 1918 Ruttie converted to Islam at Calcutta’s Jamia Mosque. On April 19, 1918 Jinnah and Ruttie married at a quiet ceremony at Jinnah’s house in Bombay. The Raja Sahib of Muhamdabad and a few friends attended the wedding. The wedding ring that Jinnah presented to Ruttie was a gift from the Raja. Nobody from Ruttie’s family attended the wedding. 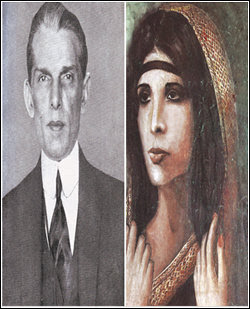 The first few years of their marriage were a dream for both of them. They were a head- turning couple; he in his elegant suits, stitched in London, she with her long, flowing hair decked in flowers. There was no limit to their joy and satisfaction at that time. Their only woe was Ruttie’s complete isolation and ostracism from her family.

Jinnah’s political life began to take its toll on his time in 1922. His heavy work schedule did not allow him to spend enough time with his young and vibrant wife. Though she was supportive of his work, the element of his lack of time was taxing for her. She could not lure him away from his work. She was engulfed with feelings of desolation. By September of 1922 she packed her bags and took their only daughter Dina with her to London.

Though her heart was still set on life with Jinnah, she could not accommodate herself to his busy schedule. From London she wrote a letter to her friend Kanji in India in which she said: ‘And just one thing more – go and see Jinnah and tell me how he is – he has a habit of overworking himself and now that I am not there to tease and bother him, he will be worse than ever .’

When she returned from England, the couple tried to give their marriage another chance, but Jinnah was involved in campaigning for elections as an independent Muslim for the general Bombay seat. Jinnah was to undergo a five-month tour to Europe and North America. He decided to take Ruttie along as an attempt to save their failing marriage. But in this trip the rift grew. There was no chance of reconciliation and in January 1928 the couple separated.

Ruttie lived at the Taj Mahal Hotel in Bombay, almost as a recluse, her health failing drastically. On February 20, 1929, Ruttie Jinnah died. It was her 29th birthday.

She was buried two days later in Bombay according to Muslim rites. Jinnah sat like a stone statue throughout the funeral. But when asked to be the first to throw earth on the grave as the closest relative, Jinnah broke down and wept uncontrollably. Later Justice Chagla said, ‘That was the only time when I found Jinnah betraying any shadow of human weakness.’

Jinnah had been good to his wife. He had been a doting husband, fulfilling the demands of his young and enthusiastic wife. She also, had played her part justly, had supported him and encouraged him in his career. But the lack of time fatefully pulled them so far apart that eventually no reconciliation was possible. The time of their separation was a trying one for Jinnah, in the photographs of this period he is never seen smiling.