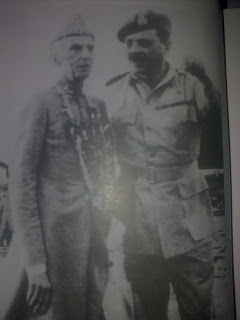 I thank you for giving me this opportunity to see you collectively. My time is very limited and so it was not possible for me to see you individually. I have told you two things: I have already said what I had to say to the Gazette Officers at Dhaka. I hope you should read an account of what I said there in the newspapers. If you have not I would request you to take the trouble of reading what I said there. One cannot say something new everyday. I have been making so many speeches and I expect each one of you to know my views by now.

Ladies and Gentlemen, I want you to realize fully the deep implications of the revolutionary change that has taken place. Whatever community, caste or creed you belong to you are now the servants of Pakistan. Servants can only do their duties and discharge their responsibilities by serving. Those days have gone when the country was ruled by the bureaucracy. It is people’s Government, responsible to the people more or less on democratic lines and parliamentary practices. Under these fundamental changes I would put before you two or three points for your consideration:

You have to do your duty as servants; you are not concerned with this political or that political party; that is not your business. It is a business of politicians to fight out their case under the present constitution or the future constitution that may be ultimately framed. You, therefore, have nothing to do with this party or that party. You are civil servants. Whichever gets the majority will form the Government and your duty is to serve that Government for the time being as servants not as politicians. How will you do that? The Government in power for the time being must also realize and understand their responsibilities that you are not to be used for this party or that. I know we are saddled with old legacy, old mentality, old psychology and it haunts our footsteps, but it is up to you now to act as true servants of the people even at the risk of any Minister or Ministry trying to interfere with you in the discharge of your duties as civil servants. I hope it will not be so but even if some of you have to suffer as a victim. I hope it will not happen –I expect you to do so readily. We shall of course see that there is security for you and safeguards to you. If we find that is in anyway prejudicial to your interest we shall find ways and means of giving you that security. Of course you must be loyal to the Government that is in power.

The second point is that of your conduct and dealings with the people in various Departments, in which you may be: wipe off that past reputation; you are not rulers. You do not belong to the ruling class; you belong to the servants. Make the people feel that you are their servants and friends, maintain the highest standard of honor, integrity, justice and fair-play. If you do that, people will have confidence and trust in you and will look upon you as friends and well wishers. I do not want to condemn everything of the past, there were men who did their duties according to their lights in the service in which they were placed. As administrator they did do justice in many cases but they did not feel that justice was done to them because there was an order of superiority and they were held at a distance and they did not feel the warmth but they felt a freezing atmosphere when they had to do anything with the officials. Now that freezing atmosphere must go and you must do your best with all courtesy and kindness and try to understand the people. May be sometimes you will find that it is trying and provoking when a man goes on talking and repeating a thing over and over again, but have patience and show patience and make them feel that justice has been done to them.

Next thing that I would like to impress upon you is this: I keep or getting representations and memorials containing grievances of the people of all sorts of things. May be there is no justification, may be there is no foundation for that, may be that they are under wrong impression and may be they are misled but in all such cases I have followed one practice for many years which is this: Whether I agree with anyone or not, whether I think that he has any imaginary grievances whether I think that he does not understand but I always show patience. If you will also do the same in your dealings with an individual or any association or any organization you will ultimately stand to gain. Let not people leave you with this bearing that you hate, that you are offensive, that you have insulted or that you are rude to them. Not one per cent who comes in contact with you should be left in that state of mind. You may not be able to agree with him but do not let him go with this feeling that you are offensive or that you are discourteous. If you will follow that rule believe me you will win the respect of the people.

Thank you very much.