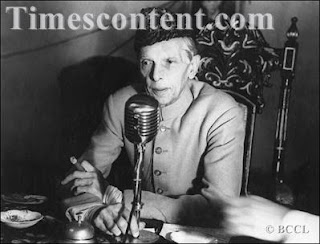 Broadcast Speech on 3rd June, 1947 from the All India Radio, New Delhi, giving his reactions to June-3 Plan

I am glad that I am afforded an opportunity to speak to you directly through this radio from Delhi. It is the first time, I believe, that a non-official has been afforded an opportunity to address the people through the medium of this powerful instrument direct to the people on political matter. It augurs well and I hope that in the future I shall have greater facilities to enable me to voice my views and opinions which will reach you directly.

The statement of His Majesty's Government embodying the plan for the transfer of power to the peoples of India has already been broadcast and will be released to the press to be published in India and abroad tomorrow morning. It gives the outlines of the plan for us to give it our most earnest consideration. We must remember that we have to take momentous decisions and handle grave issues facing us in the solution of the complex political problem of this great sub-continent inhabited by 400 million people. The world has no parallel for the most onerous and difficult task which we have to perform.

Grave responsibility lies particularly on the shoulders of Indian leaders. Therefore, we must galvanize and concentrate all our energy to see that the transfer of power is effected in a peaceful and orderly manner. I most earnestly appeal to every community and particularly to Muslim India to maintain peace and order. We must examine the plan, in its letter and in its spirit and come to our conclusions and take our decisions. I pray to God that at this critical moment. He may guide us and enable us to discharge our responsibilities in a wise and statesmanlike manner.

It is clear that the plan does not meet in some important respects our point of view and we cannot say or feel that we are satisfied or that we agree with some of the matters dealt with by the plan. It is for us now to consider whether the plan as presented to us by His Majesty's Government should be accepted by us as a compromise or a settlement. On this point, I do not wish to prejudge the decision of the Council of the All-India Muslim League, which has been summoned to meet on Monday, June 9; and the final decision can only be taken by the Council according to our constitution, precedents and practice. But so far as I have been able to gather on the whole, reaction in the Muslim League circles in Delhi has been hopeful. Of course the plan has got to be very carefully examined in its pros and cons before the final decision can be taken.

I must say that I feel that the Viceroy has battled against various forces very bravely and the impression that he has left on my mind is that he was actuated by a high sense of fairness and impartiality, and it is up to us now to make his task less difficult and help him as far as it lies in our power in order that he may fulfill his mission of transfer of power to the people of India, in a peaceful and orderly manner.

Now the plan that has been broadcast already makes it clear in paragraph II that a referendum will be made to the electorates of the present Legislative Assembly in the North West Frontier Province who will choose which of the two alternatives in paragraph four they wish to adopt; and the referendum will be held under the aegis of the Governor-general in consultation with the provincial government. Hence it is clear that the verdict and the mandate of the people of the Frontier Province will be obtained as to whether they want to join Pakistan Constituent Assembly or the Hindustan Constituent Assembly. In these circumstances, I request the Provincial Muslim League of the Frontier Province to withdraw the movement of peaceful civil disobedience which they had perforce to resort to; and I call upon all the leaders of the Muslim League and Mussalmans generally to organize our people to face this referendum with hope and courage, and I feel confident that the people of the Frontier will give their verdict by a solid vote to join the Pakistan Constituent Assembly.

I cannot but express my appreciation of the sufferings and sacrifices made by all the classes of Mussalmans and particularly the great part the women of the Frontier played in the fight for our civil liberties. Without apportioning blame, and this is hardly the moment to do so, I deeply sympathize with all those who have suffered and those who died or whose properties were subjected to destruction and I fervently hope that Frontier will go through this referendum in a peaceful manner and it should be the anxiety of everyone to obtain a fair, free and true verdict of the people of the Frontier. Once more I most earnestly appeal to all to maintain peace and order.