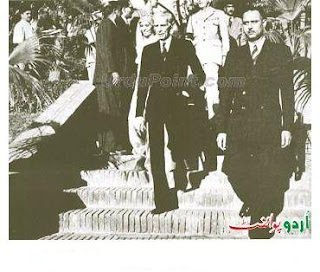 Speech at a Dinner Party given by the late Mr. Ghulam Hussain Hidayatullah at the Karachi Club on 9th August, 1947

"Yes, I am Karachi-born, and it was on the sands of Karachi that I played marbles in my boyhood. I was schooled at Karachi", proudly declared the Quaid-i-Azam.

The Quaid-i-Azam said that he then found himself in London from where after passing law, he returned to India. He was undecided what to do. But fate took him to Bombay, where he waited and waited for a long time for a brief. At last he got a brief. He went on in his own way not knowing what fate had in store for him. He now found himself in Karachi and was glad to be here.

The Quaid-i-Azam asserted that the new Sovereign State of Pakistan which had been won by peaceful methods and without dropping a single drop of blood, afforded him some satisfaction. In the course of his arduous work in that connection, it was the masses who came to him instinctively to help him and the intelligentsia came last.

The achievement was without parallel in history. He accepted the Governor-generalship of the Dominion because he knew he was not the agent of an alien power but was the chosen representative of the people.

Continuing, the Quaid-i-Azam adverted to what he characterized as the sacred duty cast upon them for solving the problem of poverty of the people. He was no believer in the mission of making the rich richer and the poor poorer. The task was difficult, of course, but they must make earnest efforts to promote the interests of the masses without necessarily disturbing the equilibrium in the bargain. "We must be just to both." He added Adverting to the minority question, the Quaid-i-Azam declared that he was no believer in formulae and paper resolutions. They were capable of being interpreted and misinterpreted.

"Let us trust each other," roared the Governor-general designate and added; "Let us judge by results, not by theories. With the help of every section --I see that every class is represented in this huge gathering --let us work in double shift if necessary to make the Sovereign State of Pakistan really happy, really united and really powerful".

Concluding, the Quaid-i-Azam acknowledged with gratitude the kind words said of his sister by the host of the evening. "Miss Fatima Jinnah is a constant source of help and encouragement to me." He revealed that, "In the days when I was expecting to be taken as a prisoner by the British Government, it was my sister who encouraged me, and said hopeful things when revolution was staring me in the face. Her constant care is about my health". He was gratified by the good words said of her by Mr. Ghulam Hussain to whom he expressed his thanks for his hospitality.