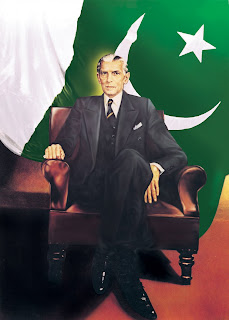 Quaid-e-Azam Mohammad Ali Jinnah, the voice of one hundred million Muslims, fought for their religious, social and economic freedom. Throughout history no single man yielded as much power as the Quaid-e-Azam, and yet remained uncorrupted by that power. Not many men in history can boast of creating a nation single handedly and altering the map of the world but Jinnah did so and thus became a legend.

"Few individuals significantly alter the course of history. Fewer still modify the map of the world. Hardly anyone can be credited with creating a nation-state. Mohammad Ali Jinnah did all three.", Stanley Wolpert

In the words of John Biggs-Davison, " Although without Ghandi, Hindustan would still have gained independence and without Lenin and Mao, Russia and China would still have endured Communist revolution, without Jinnah there would have been no Pakistan in 1947."

Lord Mountbatten had enormous confidence in his persuasive powers. But as far as Jinnah was concerned, he felt that though he tried every trick, he could not shake Jinnah’s resolve to have partition. Mountbatten said that Jinnah had a " consuming determination to realize the dream of Pakistan." And he remained focused on that till his death.

Lord Lothian had said that though Jinnah’s scheme of partition was good, it would take at least 25 years to take shape. But great wars and great men shorten history, and Jinnah was such a man who could alter the history of a nation.

The lessons he taught his countrymen were worth remembering for the life time, especially the lesson of equality. Always a worker for Hindu Muslim unity, he served a political apprenticeship in the Congress. He said: "Whatever you may be, and whatever you are, you are a Muslim , you have carved out a territory, a vast territory . It is all yours. It does not belong to a Punjabi or a Sindhi or a Pathan. There is white too in the lovely flag of Pakistan. The white signifies the non- Muslim minorities."

An upright man who always kept his word, he thought well before he spoke. If he made a promise he made sure he kept his word. In his last days when he was suffering from extreme illness, he went to the meetings and dinners he was invited to and made it to the inauguration of the State Bank of Pakistan because he had promised he would be there. He advised, " if ever you make a promise, think a hundred times, but once you make a promise, honor your promise."

Quttabuddin Aziz remarks that Muslim India was beset by socio-economic frustration. At such a time Jinnah guided a virtually rudderless Muslim League. Aziz refers to Jinnah as the greatest Muslim leader of the 20th century who was able to turn a dream state of Pakistan into a reality.

Saleem Qureshi refers to him as a messiah in the restricted sense, that he revived the spirit of nationhood among the Muslims of India and secured a homeland for them. He wanted partition to be a peaceful one because he believed in non-violence and practiced and preached it.

Director, Center of South Asian Studies, Gordon Johnson said rightly of Jinnah: "He set a great example to other statesmen to follow by his skill in negotiation, his integrity and his honesty."

In March 1940 after laborious attempts at Hindu-Muslim unity failed, Jinnah proposed the idea of an independent nation for the Muslims of India in areas where Muslims were numerically in majority. He was then given the title of Quaid-e-Azam (supreme leader) by the Muslims of India. Yet Jinnah was more than Quaid-e-Azam for the people who followed him and more than the architect of the Islamic nation he called into being. He commanded their imagination and their confidence. He was not bogged down by the daunting task of creating a home for Muslims in which they would be able to live in the glory of Islam. Few statesmen have shaped events to their policy more surely than Jinnah. He was a legend even in his lifetime.